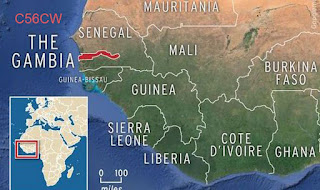 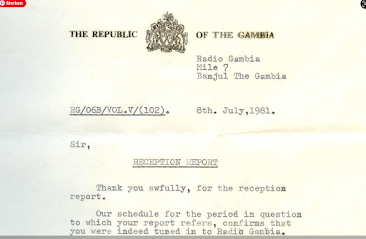 QSL Letter from Banjul for AM reception
Radio in Gambia was long time a thing of british ham operators. Then 1962 was "Radio Gambia" founded. In the beginning all programmes were rebroadcasted from other stations of neighbour countries and the BBC London. Independence was reached in the year 1965, and 1973 comes a partnership with Senegal about producing of programmes. Early Frequencies of Radio Gambia were 9530 khz, 4820 khz & 3316 khz with the ID: 'You have been listening to the Gambia Broadcasting Service'. Mostly monitored 06.30 UTC (s/on) and 22.00 UTC (s/off). Gambia left shortwave finally 1976 forever. Two mediumwave transmitters worked on 648 khz (until 2013) and on 747 khz (until 2016). Gambia moved then  to FM and the Radio was renamed into "GRTS (Gambia Radio & TV Service)".
Program-Start of Radio Gambia
Neuerer Post Älterer Post Startseite